It's been a warm and windy start to April for sure.  The warmer temps have allowed us to get a good portion of the fairway aerification done (only holes 2 and 3 left).  Hope to finish up this week which will allow us to move greens surrounds aeration up to next week on the 13/14th from the 26/27.  That way we can get out of your way sooner while weather may not be ideal for golf.

The course is farther along than most years but when it is 80 degrees people wonder why it's not greener?  It just takes time for grass to get moving when soil temperatures are still in the forties.  So even though you are in your shorts, the turf's legs are still in the fridge!

As we have said many times before, April is our set-up month with aerification and fertilizer and chemical applications coming in the next few weeks that prepare the turf for the prime golfing months ahead.  So while many of you expect fast greens right out of the gate, we are certainly not pushing for superb playing conditions at this point.  As we transition out of aerification season and weather conditions become more stable our focus will shift towards better playability.

We were able to execute our burn on Monday on a very warm and dry day.  Fortunately the wind stayed manageable but even with that the fire was quite volatile.  So we were able to complete most of the areas, but we left some on the outside of #14 and #2 just because it was too dangerous and difficult to control the fire like we wanted.  But all in all another good burn day for Wild Horse.    I appreciate my staff and some extra volunteers for their hard work to pull it off.  It has become a rite of spring here at Wild Horse, but should not be taken for granted.  We have been doing this for twenty years now and feel pretty experienced at it, but it is still a relief to get it done right without incident.

Its golf season again and the course is looking as good as it can this time of year.  The snow cover did its job as expected and both greens and fairways are looking nice.  It is easy to see how important that snow coverage was as there are a few mounds (putting green, #14, #9 are examples) that still had some snow cover albeit not very thick and those places are still brown while everything else has greened up.  Without a cover it would be looking much poorer.  So we got lucky this year.

We are in process of doing our normal spring duties.  I have started to work on irrigation-going through each station and making sure it is operating normally.  There are always a few sprinklers that don't work for a variety of reasons and now is a good time to repair them to ready them for the season.

Todd is working on path entrances and exits trying to eliminate the bump at the transition.  This is a never-ending task.  Wind and water move the finer sands off the path and it piles up in the turf border creating a lip there.  We try our best to keep that transition smooth but mother nature is always working against us.

Together Todd and I will be adding and reshaping bunkers as needed.  We had some pretty fierce winds early in the winter that really moved some sand around in bunkers so we will be working on them in the next couple weeks before we really get busy aerating and mowing.

Speaking of mowing, our first greensmowing is probably going to be around March 20-about a week ahead of "normal".

Then our next task is aerification of fairways starting around April 1.  The aerification schedule looks like this for the spring (pretty similar to past springs):

Posted by Josh Mahar at 9:47 AM No comments:

Yikes it is cold-We are so fortunate to have great blanket of snow protecting our turf!

It's that time of year when the days are getting shorter, golf is on TV, and we all know despite this cold snap that spring is just around the corner.  We, like you, are excited for another season of golf at Wild Horse.  To pique your interest here is an article on Wild Horse from Golf.com  Below that is a podcast that I did this winter.  Not that riveting, but perhaps it will pass another hour of time until our March 15 opener.

Posted by Josh Mahar at 6:46 AM No comments: 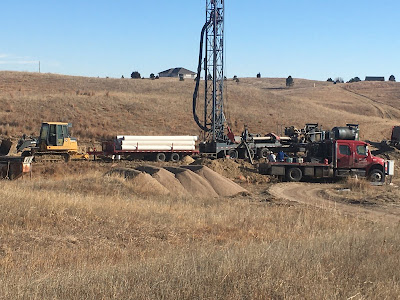 Thanks to Sargent Irrigation and Gothenburg Irrigation for drilling us a new irrigation well yesterday.  We are very excited about this new water source for our irrigation.

It was an interesting and educational experience to watch this process take place.  Really quite amazing to see a well driller in action.  Below is the drill bit used. 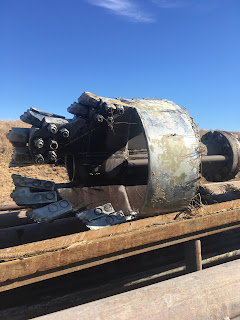 16" casing was set to 310 feet with the static water level around 40 feet.  The pump itself will probably be set around 125 feet but that will be determined after the test pump today.

This well was drilled under the same parameters as our other irrigation well and I would assume our pumping capacity will be similar.  Test pumping will take place today to determine exact specs.  The last well produced nearly 1500 gallons/minute free flow and we try to run about 1,000 GPM during our irrigation cycles.  Our sprinklers are nearly all the same and run 52 gpm so we are running about 20 heads at a time during an irrigation cycle.

Posted by Josh Mahar at 7:13 AM No comments:

In many other parts of the country the summer is the toughest time for turf with disease, drought, and heat affecting turf stands, but as we have mentioned before here at Wild Horse the winter is our most concerning time as a turf manager.  Luckily this year has been good so far.  We haven't received much moisture, but what we have has come as snow that stuck and didn't blow around like usual.   That provided a much needed blanket and consistent moisture throughout the course.  Another benefit has been the relatively mild temperatures with only a few single digit lows so far.  The turf still has a tinge of green color to it now even in mid January which indicates desiccation has not taken place at all to this point.  So far so good!

The big news here at Wild Horse is obviously the departure of Don Graham, General Manager.  It will definitely be something new for me as Don and I have worked together for nearly the entirety of Wild Horse existence.  We wish Don the best in his new endeavor and appreciate the contributions he's made to the success of Wild Horse.  Although the clubhouse and maintenance operations are somewhat removed from each other, it is imperative that we work together to provide a great golfing experience for the customer.  So we look forward to finding a new golf pro that can continue Wild Horse's success.

Other than that our winter work continues as normal with mower maintenance and reel sharpening in full swing.  This work can get monotonous but when you see those freshly ground blades scything over a new bedknife, it reminds us of the beautiful look and smell of a fresh cut fairway on June morning.  I'm sure all of you are looking forward to that as well.

Posted by Josh Mahar at 6:58 AM No comments: