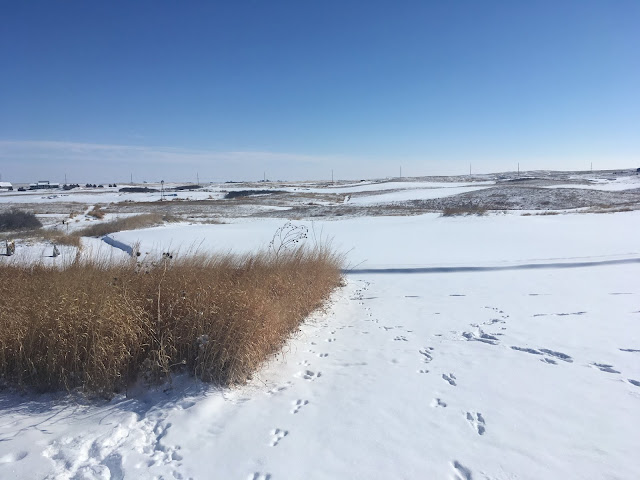 Winter is hanging on with no end in sight.  Looking at the forecast for the next ten days and there are no highs above freezing.  That means Wild Horse will be closed until at least St. Patrick's Day and probably beyond.  Luckily we have snow covering our turf during this latest cold snap.

We are as anxious as you to get out and get started on the season.  What can you expect this spring?
Well the winter has been hard on people but the ample moisture and snow cover should bode well for the greens.  Most years require some winter irrigation, but that was not necessary this year and the turf remained under a snow blanket for much of the winter.  We remain optimistic about the condition of the greens once spring arrives.
There is likely to be some ice damage due to extended periods of snow and ice in some of our bowls in fairways.  It is difficult to tell the extent at this time.  The link provided above tells you more about this kind of damage that will occur two years in a row after not so in over 10 years.  Thus the difficulty judging winter's affect on the turf.

Also expect some thinning on fairways #1, 6, 7, 12, 14 due to our aggressive Poa control efforts late last fall.  You can read more about that here .  This thinning is patchy and occurs where there was a predominance of ryegrass and Poa.  These areas will be reseeded if damage is extensive enough, but most spots will fill in with the surviving bluegrass.   Extra fertilizer will be applied to these areas to facilitate recovery.  Turf will be slow to recover however, until good growing conditions arrive in May. The first couple of times you play it may be noticeable but by mid-May they should be back and better than ever.

Our cart path work was cut a bit short last fall by the snow and cold, and we haven't been able to make any progress this winter so expect some piles of material and bumpy paths in a few spots this spring as we try to finish up some of that work.  Erosion has cut many paths over 1.5 feet and we are trying to replace that material lost especially around tees to alleviate the large step-up to some tees.  We plan to install steps (like on 13 tee) on #4 green/silver tee to make that tee more accessible.  Hopefully the fill on the rest of the paths will help around those more difficult to access teeing areas.  Bear with us as we try to improve those paths.

Aeration schedule will be similar this spring as in years past: