It's been awhile since I have posted anything here partly because fall flew by and partly because I thought "who reads this s____ anyway?"  Apparently there are a couple others besides my mom so it is time to get back to keeping  you informed on the goings on here at Wild Horse maintenance.

October was very chilly and we even dropped below zero in October which really slammed the door on the season.  The turf browned off considerably and I thought uh-oh it could be one of those tough winters.   But December was relatively mild and the turf is looking pretty good at the halfway point of winter.  We have had some moisture through snow and rain which has been beneficial.  Below are the wind-whipped drifts left behind after the late December snowstorm. 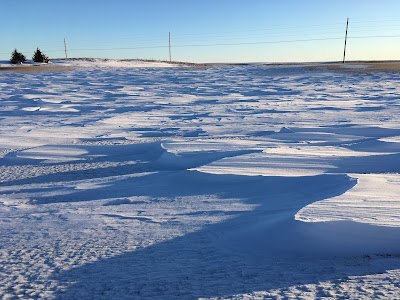 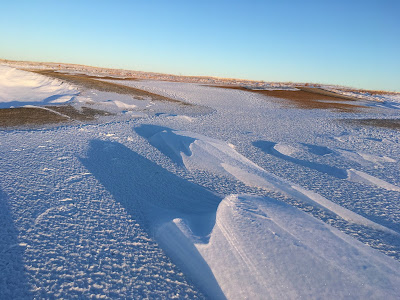 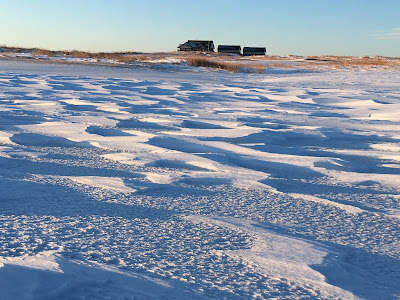 Todd Bubak continues to prep our equipment for the summer season.  Each cutting unit is disassembled and checked for any repairs necessary.  Then they are ground (sharpened) and  reassembled.  This is a necessary task but it can be a bit tedious and time consuming considering we have 36 cutting units to service most years.  So if you ask what do we do during the winter?  Servicing equipment is our main task and while we don't have a large fleet it definitely keeps us busy.

Before we moved into the shop for the winter work, Todd was able to build a new cart path up to and around 5 green which will be put into play this spring.  This will eliminate the traffic in front of six tee making that a more safe situation.   Also the flow of carts should be better with less congestion near the bathrooms.  We are also in the process of adding gravel to paths to keep them in good condition.

Opening date this spring will be March 15 (not March 1).  We felt this was a better timetable to put traffic onto the course.  If conditions warrant we will allow play before that time.