It is now the height of golf season as July is the month with the highest number of rounds played at Wild Horse.  But it is probably the worst conditions for growing grass as high temperatures and ample humidity can cause turf to suffer.  We have not been lucky enough to catch any rains recently so the rough and edges of fairways are starting to brown off quickly.  Our efforts to keep irrigation out of the rough is readily apparent now as the first cut beyond the fairways is brown and crispy.  Below is a good example of where irrigation is and where it isn't.  There are still some areas that receive some irrigation overspray but without rain even those areas are becoming parched.   This is definitely makes finding and hitting balls from the rough much easier but the "look' of the fairways may not be as consistent due to a few brown spots here and there.  But all in all the course is holding up well and golfing conditions are great. 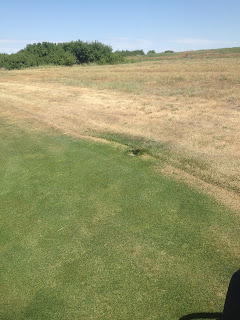 I posted a video of this critter on twitter about a week ago under the caption of "Omaha rattler".  Every year we have one or two people swear they saw a rattlesnake.  Not to say it couldn't happen but most of the time they are probably seeing this critter-a hognose snake.  It very much looks like a rattlesnake from its markings and its diamond shaped head.  It will even twitch it's tail rapidly which  can look and sound almost like a rattlesnake. These guys are generally pretty timid although this one was a bit feisty.  I attribute that to him being the largest  specimen I have seen.  Really a cool snake to have on the property-keeps you city folk on edge.  Ha! 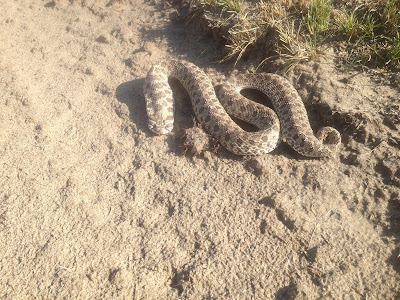 Oh I barely recognize you with your haircut!  You can see we have knocked down some areas of rough similarly to last year. You can read about why we do so in a previous post on rough management called Gnarly "Wooga" 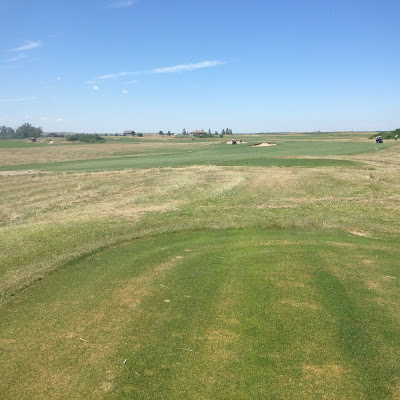