It's that time of year again! 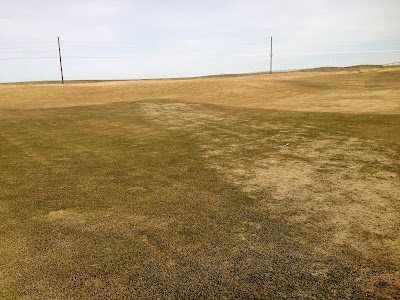 Ouch that looks bad!  What is going on here?  We did some experimenting last fall in an attempt to find a cheap way to knock out Poa annua.   This is glyphosate (Roundup) applied at light rates.  We were confident the glyphosate application would not harm the bluegrass enough to cause damage but we were hoping to find the rate that would kill poa and not the ryegrass also.   The green rectangle you see above is one rate and the diagonal line that looks worse is 2x that rate.  As you can see the 2x rate caused some damage to the ryegrass but that strip should respond quickly when the remaining bluegrass starts to grow.  The picture below shows a 4x rate that we tried to see if we could get better poa kill and maintain some of the good grasses.  This area was predominately poa and ryegrass so it took this application pretty hard.   It looks like this is too much, but you never know until you try.  There are still a few remaining bluegrass plants  that should hold it together but we will be reseeding this strip this spring.  The jury is still out on how much poa we killed.  Many times it will look dead but come back.  By mid summer we should see what we gained from this type of poa control strategy. 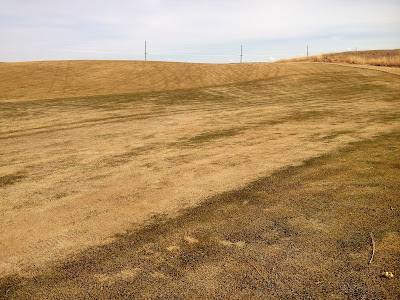 So why would we take the risk of using glyphosate in an attempt to control poa?  There are two reasons.  First, the cost of light glyphosate treatment is next to nothing so it would be a huge cost improvement over the alternative we will discuss later.  Also poa has a tremendous diversity in its population so strictly using one control strategy tends to fail over time as resistant strains of poa can by selected.  By employing different strategies better overall control should be achieved which is Weed Resistance 101.

The picture below illustrates our preferred poa control strategy (although not our exclusive one).  The white splotches below are poa annua plants that are succumbing to our Prograss applications from last fall.   Pretty effective but the cost is nearly $450/acre so finding a cheaper alternative would be beneficial. 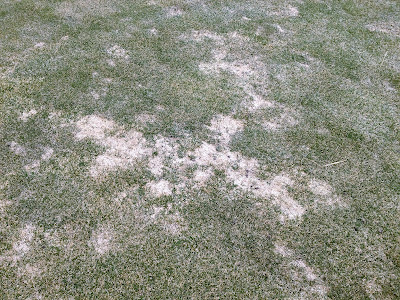 Now you know why we have some odd looking strips scattered in fairways.  These are our test plots to evaluate poa control strategies.  Hopefully you see why we experimented last fall and although the strip on 17 fairway may not have worked as we hoped, we learned something in the process and might be able to dial in an effective rate for poa control in the future. 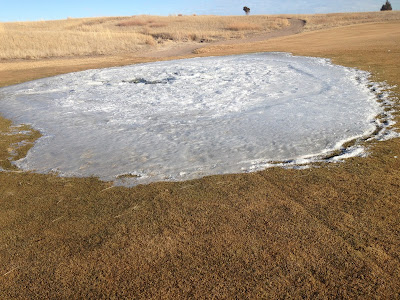 Here's a picture from this winter in front of 6 green.  We had a deep line hydrant break and ran water into this sump and it froze as you see here.  This next picture is what that area looks like now.  It is pretty apparent that there is some ice damage that occurred around the edges of this frozen pond especially right up next to the path (just above my dog in the pic).  We rarely have ice damage in this climate but in other areas of the country it can be devastating if certain conditions exist.  The interesting thing is that you see the middle of the pond is undamaged because it was under water.  Apparently the grass was able to breathe enough under water but not under the ice cover near the edge of the pond.
This particular area has a large percentage of rye because it is chronically wet and receives a lot of traffic from carts as they exit the fairway.  Both of those conditions favor ryegrass over bluegrass, but ryegrass is much more susceptible to ice damage than bluegrass.  So this is an interesting turfgrass ecology lesson as each species finds its niche in certain microenvironments on the course.  If you look closely at other low areas that might hold water and ice during the winter you will see that they are almost purely bluegrass since over the years the rye has been killed by ice. This area will probably receive some seed in a couple of weeks and recovery should happen fairly quickly because there are some surviving bluegrass plants that should fill in the voids. 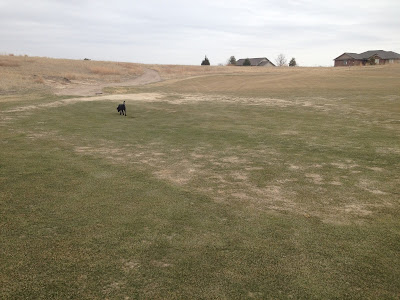 Posted by Josh Mahar at 6:36 AM No comments: